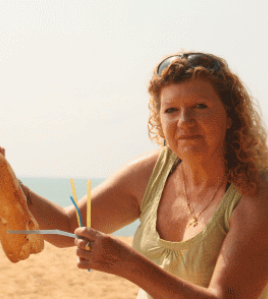 Jo Ruxton joined the BBC Natural History Unit in 1997 after working for WWF HK for 7 years and was part of the celebrated Blue Planet team. She went on to head up the BBC’s dive team and involved in numerous underwater filming projects around the world, from Antarctica to the pristine reefs of the Caribbean and the Pacific Ocean. After leaving the BBC, Jo decided to produce the award-winning documentary feature, A Plastic Ocean after initially hearing about the plastic problem in 2009 and began raising the funds to start the filming, the beginning of an 8-year journey to its release.

She co-founded the Plastic Oceans Foundation 10 years ago to help the fundraising process and to take the message of the film beyond its release through three main programmes, Science, Sustainability and Education programmes. Then film has now been screened in more than 60 countries in 15 languages and there are plans in place for her next one.